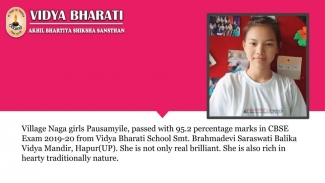 Vidya Bharati student Pausamyile, comes from a Naga Tribal Village. She passed her CBSE Board examination with 95.2 percentage marks. She is a student of Smt. Brahmadevi Saraswati Balika Vidya Mandir, Hapur (UP).

The school was established in 1988 to build the ethos of nation-building and Indian culture with the objective of overall development of a girl child. It has a unique system of education called “PANCHMUKHI/SHATHPADI SHIKSHA” which includes six important elements namely moral education, spiritual/Yoga education, physical education, Sanskrit education, music education and vocational education. Synthesis of spiritual and moral values with academic achievements being the key features of the institution. Within its premises a hostel for tribal girls known as IDRF Banwasi Chatrawas was constructed in 2002 under the aegis of ‘Shiksha Bharati’. It started with a total of only 9 tribal girls (4 girls from Assam and 5 girls from Tripura) and presently houses 73 girls from several states such as Uttarakhand, Chhattisgarh, Ladakh etc. Under Shiksha Bharati, there is Shishu Vatika, Shri Madhav College ( B.Ed college), Ayurvedic Herbal Garden and Gaushala, Gram Vikas Yojna in which 5 villages have been adopted.

Vidya Bharati Akhil Bharatiya Shiksha Sansthan is the largest educational organisation in the world. Vidya Bharati is giving Bharatiya Darshan and Sanskar to around 34,52,615 students who are studying in 28,435 Vidya Bharati’s schools starting from  primary level to the college covering cities, towns, villages and remote villages including hills and border areas. 1,46,643 dedicated teachers (Acharya-Acharyyas) are engaged in teaching and guiding them in making these students self dependent.