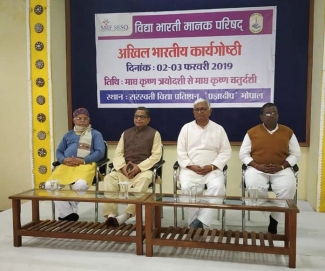 Vidya Bharati Akhil Bhartiya Siksha Sansthan is the biggest educational non-government organization in the country and must be the biggest in the world too. Today under its umbrella more than 13,000 formal schools and more than 10,000 informal schools run providing education to some 30 lakh students.

To provide value-based education dedicated to serving the nation, the foundation of the organisation was laid in 1952 with the start of a Sishu Mandir in Gorakhpur in Uttar Pradesh. The strong administrative structure starting from the school, block, district, state, and area-level with dedicated volunteers steer this nation-building program.

WHY THE MANAK PARISHAD

With the basic aim of providing India-centric education, the best in its class, and with the objective to fulfill the expectations of the society from Vidya Bharati, a decision was taken to form the Manak Parishad to see that quality does not hamper with the ever-growing numbers of schools. Quality and quantity had to go together.

On 4th November 2014, a team of the national executive of Vidya Bharati met in the offices of the Mutha Foundation in Pune, Maharashtra. Considering the presentations made there, the team approved the basic concept and SMF SESQ was given a go-ahead. SMF stands for Shantilal Mutha Foundation and SESQ stands for System for Enrichment of School Quality. It may be mentioned that SMF is working for a long to bring about basic improvements in education.

A decision was taken to do a sample study in a few schools. It was also decided to do a workshop to train a few assessors who will undertake this initial study. A week-long training program was held in Lonavala, Maharashtra in which selected 30 volunteers of Vidya Bharati were given extensive training.

The assessment process of this first study was conducted in selected 24 schools spread over seven states – Assam, Delhi, Goa, Jharkhand, Madhya Bharat, Odisha, and Rajasthan. A total of 29 assessors, which included 15 from Vidya Bharati and 14 from Mutha Foundation, undertook this exercise from February to April 2015.

This first evaluation was discussed by the Vidya Bharati team in August 2015 and the decision was taken to present the findings in the forthcoming general assembly. In this meet, the go-ahead was given to take this up on a larger scale to cover more areas.

Training camps for assessors started being organized in different areas and the work started earnestly. Various process improvements started happening, Standard Operating Procedures (SOPs) for different assignments were made, etc. All these exercises were being undertaken with the basic objective of ensuring that the quality of education in Vidya Bharati schools improve.

On 16th June 2018, the formal office of Manak Parishad was inaugurated on the premises of Saraswati Vidya Pratisthan in Bhopal.

As of Sept 2019, Assessor Training Programmes have been completed in all the 11 areas of Vidya Bharati. A total of 17 training programs were conducted in which 516 assessors were trained.  A total of 841 schools have been assessed.