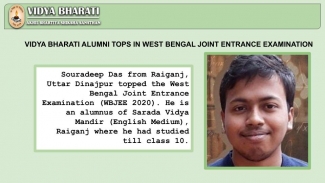 Souradeep Das from Raiganj, Uttar Dinajpur topped the West Bengal Joint Entrance Examination (WBJEE 2020), results of which were released recently. He is an alumni of Sarada Vidya Mandir (English Medium), Raiganj where he had studied till class 10. After this he completed his class 12 from Ramakrishna Mission Vidyapith, Deogarh. He scored 97.8 percent in CBSE class 12 exam with 100 in Maths, Chemistry and Biology, 99 in Physics and 95 in English.

Souradeep is also preparing for JEE Advanced – an entrance exam for IITs and aims to get admission in Computer Science at IIT-Bombay. His long-term plan, however, is to pursue research in either Mathematics or Physics.

Vidya Bharti Akhil Bhartiya Shiksha Sansthan is world's one of the largest educational NGOs which runs the largest private network of schools in India. Vidya Bharati is giving Bharatiya Darshan and Sanskar to around 34,52,615 students who are studying in 28,435 Vidya Bharati’s schools starting from  primary level to the college covering cities, towns, villages and remote villages including hills and border areas. 1,46,643 dedicated teachers (Acharya-Acharyyas) are engaged in teaching and guiding them in making these students self dependent.