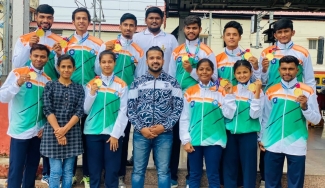 Palak Singh, a student of Swami Vivekananda Saraswati Vidya Mandir Sahibabad, brought laurels to the school and her parents by winning a gold medal in the Indo "Nepal International Championship" in Basketball.

The school's media in-charge Lalita Tyagi said that this championship was held in Nepal from August 25 to August 28 on behalf of the School Game and Activity Development Foundation of India. In which players from every corner of India reached Nepal. Like Uttar Pradesh, Haryana, Tripura, Gujarat, Bihar etc. Palak is a promising student of the school who has always considered her father as her role model and Palak has been able to win this title only due to the inspiration of her father and the direction of her teachers. Palak had earlier won a gold medal in the Delhi National Championship, Palak will now go to Dubai to play the Asian Games.